I'll go through the steps I did to make my Macbook usable. All the applications that I use are(or were) free at the time of writing.

Virtual desktops with the awesome Trackpad is a killer combination but some of the default actions are not so clever. First thing to do is to make sure that your workspace switching happens by swiping four fingers right or left. This can be set from System Preferences: 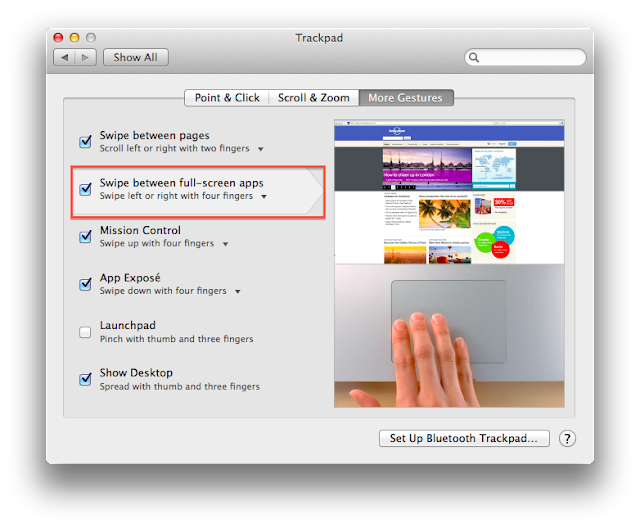 First I was annoyed by the Cmd - Tab behavior, but now I'm used to it. It is actually quite good, because there's usually only a few apps open compared to ~30 open windows. I binded Cmd - § to Move focus to next window. This can be done from System Preferences under Keyboard: 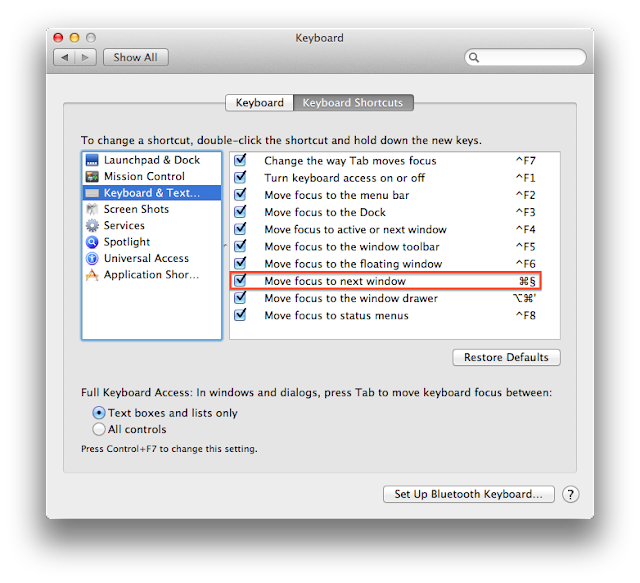 In my layout § key is the key above Tab. This is bearable but the window switching should work like the app switcher. There should be a "stack" of last used windows.
Now if I want to specific window, I first switch to the app and then find the correct window of the app.

When switching to a minimized app, workspace will be switched where the window should be, but the window stays minimized. Why? I would want it to be shown(unminimized?).

Use Cmd - Hto hide windows rather than minimize.

This button is a mystery. I thought it was the maximize button, but instead it's called 'zoom'. Apparently it tries to make the window bigger somehow. It doesn't work at all. The behavior isn't consistent between applications.

Download iTerm2, it is great.
Settings that I've changed: 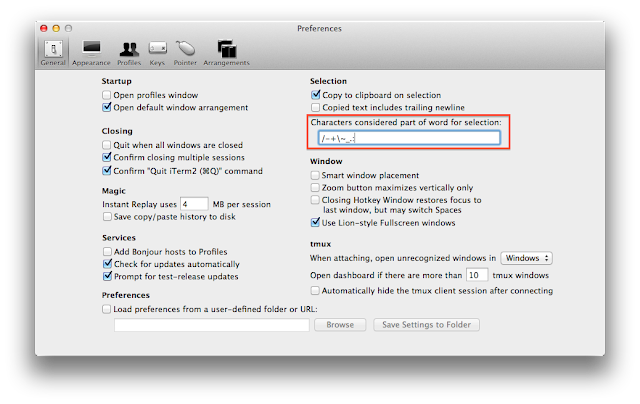 Added ':' character to Characters considered part of word for selection. 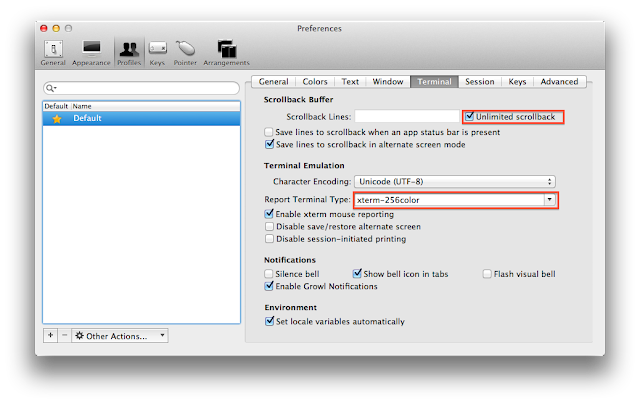 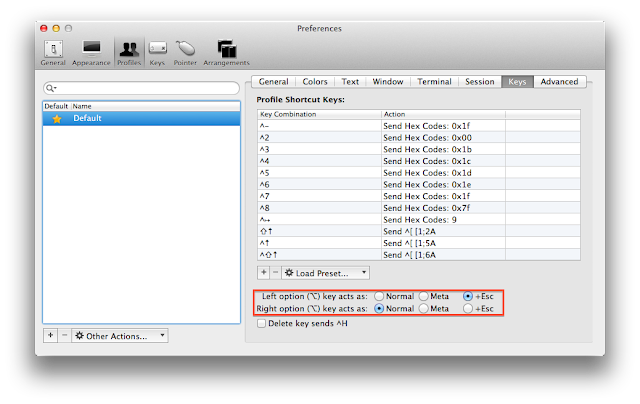 I have Finnish keyboard layout so pressing Alt - 2 produces '@' character.
Therefore I changed only left Alt  to act as Meta.
It makes possible to switch channels in Irssi with left Alt.

I explored a few options to edit remote files on my server via SSH:
- Cyberduck
- Unison
- Macfusion

After all I ended up using Macfusion. First you must install OSXFuse from https://github.com/osxfuse/osxfuse/downloads. Otherwise the Macfusion does not work. I have set the mountpoint to Desktop.

After installing a bunch of apps, I want some of them to be easily accessed. Assigning some keyboard and swipe shortcuts is the way to go. To customize them, download BetterTouchTool. It handles shortcuts for Trackpad, keyboard, Magic Mouse and normal mouse. 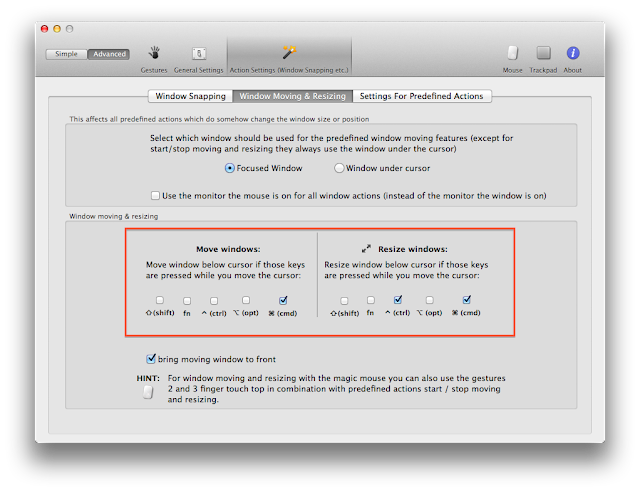 Change these settings to move and resize windows easily. These shortcuts don't always work as expected, but they are good enough. 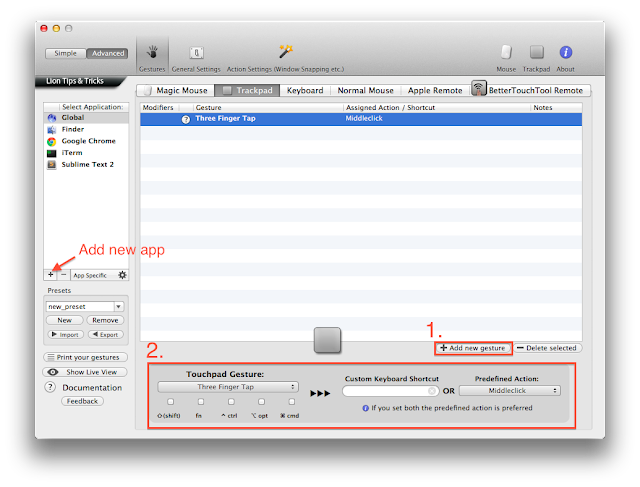 First click Add new gesture, then modify it to your needs. To add app specific shortcuts, find out the application's keyboard shortcut for the action. For example Chrome closes tab with Cmd - W. Then bind a gesture to that keyboard shortcut.

I have the following swipe shortcuts(Finder does not have any):

This way I can close tabs and open links to new tabs in Chrome with three finger tap.

These commands are to help using Irssi.
Down->Switch to a window which has had activity, Left->Previous window, Right->Next window, Up->Switch to last window. To make the last shortcut work, in Irssi:
/bind meta-l command window last

Exactly the same shortcuts than in Chrome.

I have the following keyboard shortcuts: 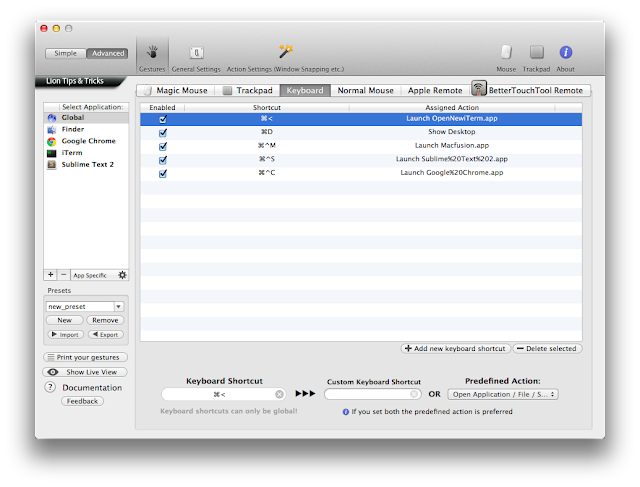 iTerm doesn't open a new terminal window when it is launched. To make it happen, you must create an applescript that does it. I followed these instructions: http://apple.stackexchange.com/questions/46224/how-to-make-clicking-on-icon-in-dock-open-new-instance. After that, move OpenNewiTerm.app to /Applications and bind a keyboard shortcut to launch it.

There have been many annoyments but I can't remember them all.

Download StartNinja. It is pretty straightforward to disable the startup sound with it.

A simple hack to make SSH reconnect when connection closes. I have set SSH keys to login automatically. Add an alias for loopssh to your ~/.bash_profile: